As of the date I wrote this article, there has been no change in the NTSB’s report of fatal accidents here in Arizona. The NTSB report, show here, lists those five fatal accidents, describing five fatalities (of which four were pilots) and three serious injuries (one pilot and 2 passengers). A recap of those accidents are as follows:

Two of the accidents occurred during June, ironically both the same day, and both were experimental home-built aircraft. A Zenair CH601 departed Deer Valley en route to Ak-Chin,struck the very top of a small mountain about 2 miles northeast of the Ak-Chin airport, and was destroyed by fire. The pilot/owner was fatally injured. The second accident involved a RV-4 inbound to the Safford airport. The aircraft impacted a hillside during the approach, and the sole pilot onboard was fatally injured.

Two of the other accidents involved helicopters, one near Mesa the other near Payson. Both were Bell UH-1H’s. The crash near Mesa was apparently caused by the loss of the tail rotor, while the second helicopter was assisting in firefighting efforts, using a long line to lift/transport supplies to a hotshot crew. On the fourth lift, things went drastically wrong and the helicopter crashed.

The fifth crash was a Piper PA-28 on a personal cross country flight from Falcon Field to Payson and back. The pilot stated in an interview that after a flight earlier that morning, he departed from Falcon Field Airport (FFZ), Mesa, Arizona, en route to Payson. He landed in Payson, refueled, and departed for the return flight back to FFZ. During the return flight, the pilot decided to fly over the mountains southwest of their position. He stated that he flew about 1,000 ft above ground level (AGL) over the mountains, while the passengers were spotting wildlife on the terrain below. The pilot stated the airplane was running well and doesn't remember anything else until waking up in a small creek at the accident site.

FOR INFORMATION ON ALL ACCIDENTS/INCIDENTS THAT OCCURRED LAST MONTH, REFER TO JIM TIMM’S ACCIDENT SUMMARY. 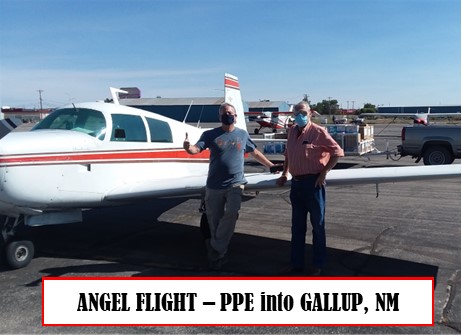 Going flying, escaping into the beautiful “wild blue yonder” is a great way to enjoy quarantine, but if you take your wife or a friend with you, don’t forget masks, wipe down your controls, avionics knobs, door handles, seat buckles, etc., and be sure to clean all of your headsets.

Another great way to escape and help your fellow human beings is to volunteer to fly for organizations moving PPE and other much needed supplies. Flights for Life, Angel Flight, or simply local efforts (like APA), are always looking for volunteers to help deliver supplies and you might possibly be able to write off your fuel as a donation.

So do your good deed for the day, but don’t forget your mask… 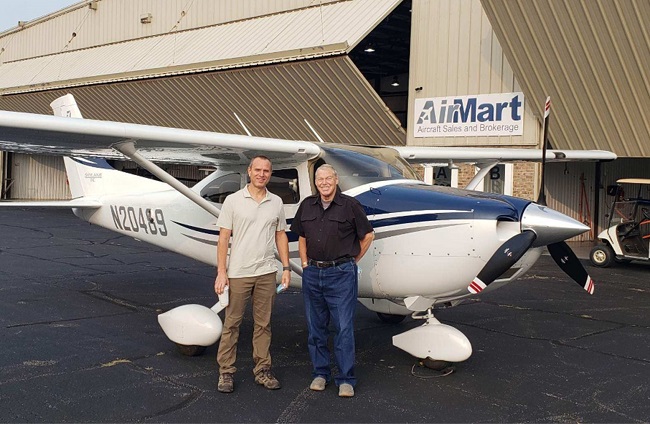 OK, so picture yourself trying to find the aircraft broker’s office at the Lexington airport  in Lexington, Kentucky. Thank goodness for Uber and GPS. So there we were at 0800 on the dot to pick up a pristine turbo Cessna 182 that my friend and freshly minted private pilot – let’s call him Doc - had just purchased. It’s a really nice C182T, fresh annual plus a pre-purchase inspection, fresh IFR certification, full oxygen and full tanks (80 gallons), full IFR G1000 panel, autopilot, lots of bells and whistles, ADS-B in and out, air bag-style seat belts and shoulder harnesses, Rosen visors, a beautiful leather interior, and a great paint job. All we had to do was “kick the tires and light the fire” and head home to Flagstaff, with just one minor issue. My newly minted private pilot/new owner Doc had NOT one hour of complex airplane time, NOT one hour in a C182, NOT one hour of turbo time, nor any experience whatsoever (except for some YouTube videos) on how to operate the G1000 glass panel. My job was to teach Doc both how to fly the Turbo 182 and learn the basic operation of the G1000 during our flight back home. We had allowed 3 days to do lots of flying, and if the weather were to cooperate, possibly some mountain flying in Colorado.

We started by spending almost an hour on the ground going over checklists, equipment, controls, G1000 basics, engine operation, speeds and power settings, and basic navigation set up for the first leg. First stop out of Lexington (KLEX) would be Spirit of St. Louis airport (KSUS) about a 2 – 2 ½ hr flight in clear skies and unlimited visibility, light winds aloft, and a smooth ride. And, oh yeah, NO autopilot – YET! I had Doc check the (paper) sectional chart for any airspace issues for a direct flight to KSUS – there were none – and we did a basic direct flight plan in the G1000, choosing to cruise up at 12,500 ft. with a plan to use flight following the entire way. By 1500 Zulu, we lifted off and were on our way. Doc trained in a C172 and was surprised by the heavy feel of the Turbo 182, but definitely impressed with the performance on climb out. We turned on course, climbed to 12,500 ft., leveled off, trimmed it out, re-set the power per the checklist/performance charts, and it flew beautifully. 2 ½ hours later we landed at KSUS. Doc’s first try at landing the Turbo 182 and his first lesson on checklists before landing, as well as tips on the landing process, went OK, but he discovered it is NOT a C172! 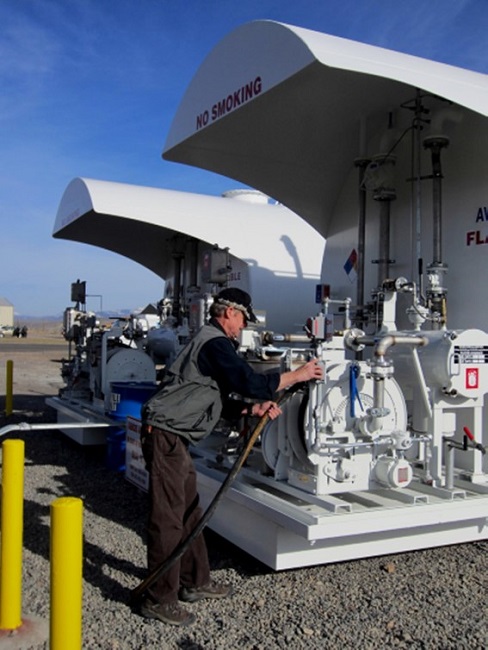 With the aircraft full of fuel, us with empty “tanks” and fresh in-flight refreshments, we departed on the 2nd leg, St. Louis, Missouri, to Hill City, Kansas, another 2 hour flight. However, on this leg, we had to program the G1000 to detour around some restricted airspace, so Doc got his first lesson in programming a flight plan into the G1000 by having to input several VORs for us to navigate on to avoid that airspace. With that done, we were on our way. Doc picked up the power settings procedures very quickly, and had us at 12,500 ft all set up for cruise. He was picking up the flying very quickly, and starting to grasp the G1000 PFD basics, although the multitude of data and pages within the G1000 MFD was still mind boggling. On this leg, I introduced the autopilot. Its operation is very intuitive, and he picked that up very quickly. We used it on this leg to relieve some of the workload to spend time on some other stuff, like re-programming the flight plan (entering/deleting waypoints, etc.), tuning into different VORs, how the G1000 displays the different VORs versus the GPS, and autopilot operations (HDG vs NAV, changing between HDG vs NAV, changing and capturing altitudes, and finding information in the MFD).

In just over 2 hours we were refueling at Hill City, Kansas, a small airport with only self-serve gas and NOT a single airplane in sight at the airport! 30 gallons and 30 minutes later we were airborne on our way to the Denver-Centennial Airport (KAPA), our planned stop for the night. Again, Doc did a good job of flying, but still not yet solid on the process for engine management. We would work on flow the next day. We programmed a direct route into KAPA, planning to get clearance through the Class B airspace into KAPA, when Denver Center threw out our first challenge: they were too busy to work us and told us to remain clear of the Class Bravo. That should have been a no-brainer, but the G1000 moving map display in the MFD did NOT display the class Bravo shelf bases, and we did not have a Denver TAC chart! Our solution was to simply fly at 1500 ft above KAPA airport elevation all the way in. That actually worked quite well, but it required a lot of looking out the window for traffic at KAPA. The tower had us enter the pattern on a 3 mile right base to 35 Right. We landed with no issues other than Doc made a crummy landing due to overload at the moment. We taxied into the FBO and shut down. That ended a 6.5 hour day of flying and we needed a night to let all that learning sink in our grey matter. We also hit one of the best steak houses in Denver, and over a drink (or two), discussed the day’s accomplishments and boo-boo’s. 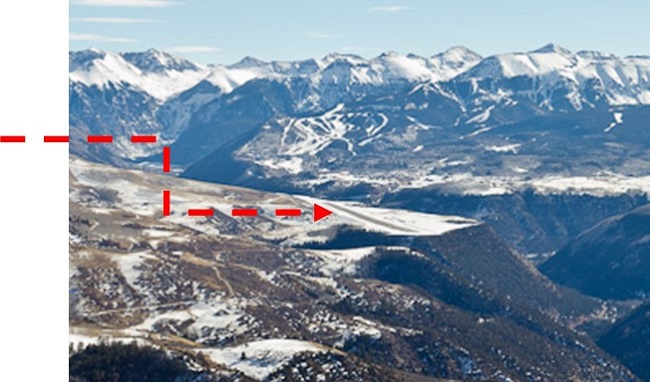 A check on the next day’s forecasts determined we could do the Rocky Mountain trip, clear and unlimited visibility with winds aloft forecasted to be less than 14 knots below 18,000 ft. We discussed all the planning that would be needed to do such a flight, including going over some very high mountains and possibly climbing up to 13,500 for a brief period of time to get over some ridges. That brought us into a discussion of oxygen requirements and power settings, navigation, and terrain clearances. We also discussed the routing we would need to make this leg of the mountain flying flight: Denver-Centennial Airport westbound to Eagle, then over the high terrain to Aspen, then to Grand Junction for a fuel stop, then off to Telluride, (follow the arrow) Montrose, and Durango, CO, then to Farmington, NM, Chinle, AZ and on into Flagstaff. This would be a challenging trip and a great introduction to mountain flying and some of the most challenging and dangerous airports in the country. Doc was about to get a great flying lesson tomorrow…

Tune in to the November issue to see how this all ended!

Do you know why there is no aircraft registered in the U. S. using the registration of N16020 and that you cannot even request that N number?

Answer: It was the registration of Amelia Earhart’s aircraft and at the request of the Ninety Nine’s, it has been permanently retired by the FAA.

If you see a line of big yellow circles painted across a runway, what’s that mean?

Answer: The line of 10-foot diameter circles painted across a runway indicate where arresting cables – like those used on an aircraft carrier to stop the landing aircraft – are located on a runway. Some joint use airports have such cables, and lo and behold, YUMA International Airport is one of them.

How come my indicated airspeed, my true airspeed, and my ground speed almost never agree?

Answer: It is actually quite simple to explain: Indicated airspeed is the impact pressure coming in your pitot tube directly to your airspeed indicator based primarily on the outside air pressure. True airspeed is your indicated airspeed corrected for altitude and temperature (OAT). It is usually higher than indicated airspeed, and some altimeters have a 2nd knob that allows you to set both into a window and it rotates a second airspeed face to show true airspeed. Ask your instructor to show you how that works if your altimeter has that capability. Ground speed is your actual speed across the ground taking in to account your true airspeed AND THE EFFECT OF THE WIND! For example, if my true airspeed is 100kts and I have a 100kt headwind, my forward ground speed is ZERO! It is actually possible to fly backwards… Hmmm, can I get my GPS to show a negative airspeed???

There are not a lot of FAASTeam safety programs on the schedule over the next couple of months all around the state, so go to WWW.FAASAFETY.GOV , click on “Seminars” and check them out for any Webinars you might be interested in. You might find one that really is right up your alley!! Should you desire a particular safety or educational program at your local airport or pilot meeting in the future (post COVID-19), like the BasicMed program or our “Winter Wonderland” snow season special, simply contact me directly at This email address is being protected from spambots. You need JavaScript enabled to view it., or call me at 410-206-3753. The Arizona Pilots Association provides the safety programs at no charge. We can also help you organize a program of your choice, and we can recommend programs that your pilot community might really like.