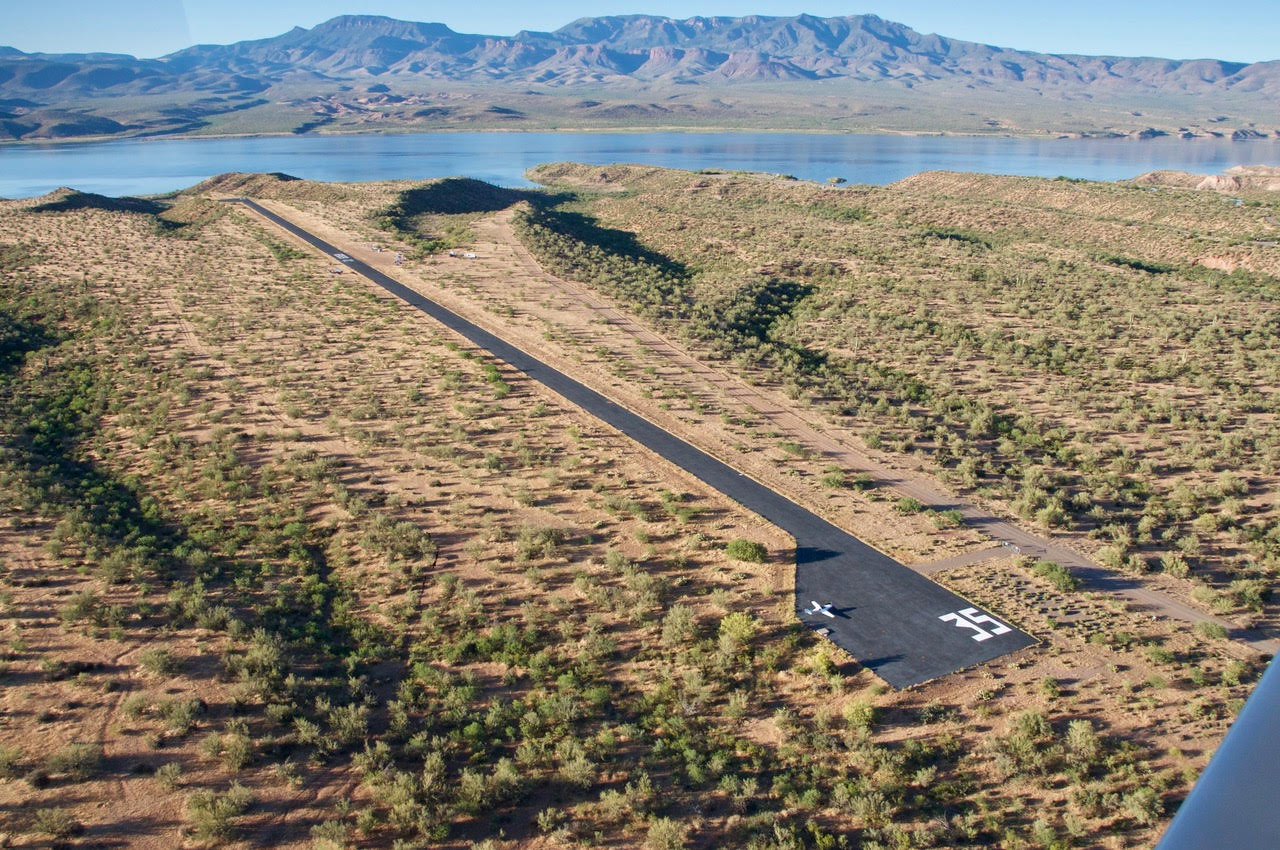 The recent AZ Airport Focus articles have focused on what to do around the airport, based on what the communities have to offer. This month is different, and we’ll focus on the nothingness around this particular airport. In this case, getting there is getting away, and it can be pure bliss. As much of our membership can attest, the Grapevine airstrip (88AZ) on the southwest shore of Lake Roosevelt has collected much of our membership’s DNA in the form of blood, sweat, and tears through the multi-year renovation that APA spearheaded. APA supporters transformed Grapevine from a brush-strewn length of deteriorated asphalt into the gem it is today. It is now the pride of the US Forest Service as the only one of two paved runways in their national inventory. The cleaning, crack-sealing, and top-coating are complete, and the markings were completed thanks to the Phoenix 99’s. It also highlighted what can happen when volunteer organizations cooperate with the government, and it’s serving as a model for more airports. APA has published several articles and Mark Spencer has fully detailed the efforts taken to truly transform the dilapidated strip into what it now is, so this article will focus on getting there and getting away!

A mere 50 miles nearly due East of Phoenix, getting to Grapevine may not seem like much of a jaunt. You may ask yourself if it’s even worth going, since the engine will just be getting warmed up by the time you get there. Leaving home airports such as Falcon Field, Deer Valley, Marana, or Ryan, the hustle and bustle of simply taxiing for departure quickly falls way to a dramatic overflight of the Mazatzal range that includes Four Peaks. It’s here that you can visualize Arizona’s rugged landscape. Four Peaks tops out at 7657’ MSL and just a few miles to the South, Grapevine sits at 2329’ MSL, demonstrating the majesty of this range. There are several other peaks over 6000’ MSL, so while going over the range is an option, the year-round thermals can make for a more interesting flight than anticipated. 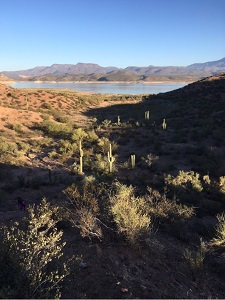 While the Grand Canyon is amazing from the air, the Salt River Canyon can be even more dramatic. Running from the Roosevelt Dam to Saguaro Lake, the canyon is lined with steep rocky cliffs. The canyon is under the Salt River Bald Eagle Breeding Area wildlife area and overflight is recommended at least 2000’ AGL. The scenery passing below is just as spectacular from that altitude, so respecting the area is easy and reducing the chance of a bird strike is well worth it. Cruising in from the south near Weaver’s Needle makes for an equally fantastic overflight. Again, altitude is required to clear the range and get to the lake. 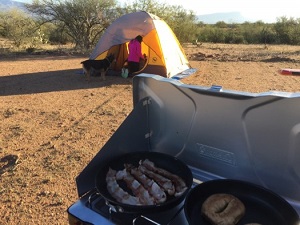 Once near the south end of Lake Roosevelt, make a call on CTAF 122.9 and set up for landing. The runway slopes 1.3 degrees with the high end to the south. Calm-wind landing is typically uphill on Runway 17. This approach takes you over the shoreline and water of the lake. The tall saguaro cactus waving to you at the approach end is shorter than it appears on final, but is an obstruction nonetheless. The runway is relatively long and wide for a “backcountry” strip at 3800’ x 40’. Even on approach, the effort poured into the strip is apparent as the smooth asphalt and clear markings get closer. After landing and engine shutdown, the silence and peacefulness of the area sets in. Pull the plane off the runway and into one of the many spots along either side of the runway at midfield and then relax. We’ve seen everything from Light Sport Aircraft to business twins and even amphibious seaplanes taking advantage of this fantastic airstrip. 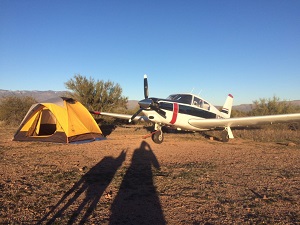 Getting there is getting away from it all. With no vehicular access and sitting on Forest Service property, there are no residential areas or retail establishments nearby. The closest of either are in the town of Roosevelt, approximately 5 miles South. The Sonoran Desert scenery envelopes you as you sit back and relax in the shade of your wing or the APA volunteer-installed gazebo. Grapevine makes a perfect morning or afternoon getaway to just go and relax, or an even more perfect airplane camping destination. In addition to the gazebo, APA volunteers installed a firepit and provided picnic tables. The flat parking areas make an ideal place to set up a tent and hang out under a wing for the weekend. From September through May, APA provides a porta-potty onsite to make things a little more comfortable. Please check burn policies in effect in Tonto Forest and plan meals accordingly. 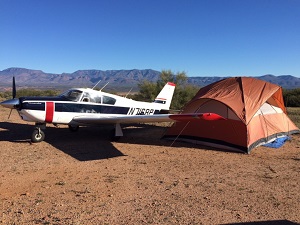 A moderate hike takes you to the shore of the lake where you can cast a line in the water looking for bass, crappie, sunfish, and catfish. If you decide to fish, make sure you obtain a fishing license from AZ Game and Fish. You can purchase them online through their website. Hikes to the east and west of the airstrip take you through ravines with aggressive slopes, so wear shoes suitable for hiking and bring plenty of water. Besides the fishing and hiking, perhaps the best part about Grapevine is the ability to just sit and relax. No worries about what to do next or how to make a schedule work – just relaxing. As an added bonus, APA hosts a monthly barbeque on the third Saturday of each month from September through May. Bring an appetite and a few dollars as a donation towards the groceries and enjoy great hangar flying with some amazing people. There is always enough food, so bring friends along and introduce them to the reason you fly. This isn’t an experience you just get to drive to. 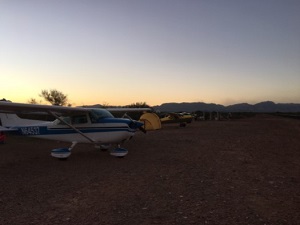 Once you’ve had your fill of relaxation or realize you need to get back to reality, pull your plane back out on the runway and plan for a north departure down Runway 35. Wind-permitting, this allows a downhill takeoff with no immediate terrain concerns. Departure is over the lake and APA recommends noise abatement by climbing away from local boaters or fishermen below. Like most of Arizona’s airports in the summer, density altitude will affect takeoff and climb behavior, so pay attention to your aircraft performance and personal minimums. 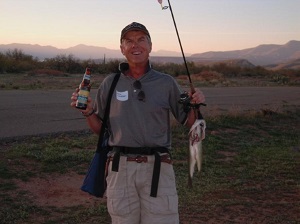 In 2017, Grapevine officially opened to the public, no prior permission is required! While charted as private, due to some complicated details, the strip is a USFS recreational airstrip. As such, no training activities or touch and goes are permitted. The airstrip is open to the military and they often perform exercises on or near the airstrip. It is always a good idea to fly the runway before landing to ensure that it is clear. The Forest Service has also asked that pilots avoid overflight of the Tonto National Monument only 3 1/4 miles to the west-northwest of the strip or any of the campgrounds to the east and west. The campgrounds are easily spotted by the blue-topped shade structures scattered throughout. Please visit the APA’s website to download and print the Grapevine safety brochure in PDF under the Pilot Resources tab. The brochure provides detailed airport information and standard procedures in place. If planning to camp, we ask that you send a quick note to This email address is being protected from spambots. You need JavaScript enabled to view it. letting us know. We are cooperating with the US Forest Service on several other airstrips in Arizona and a use case will help establish the demand for more.

Grapevine holds a special place in my heart, as it was my introduction to APA as an organization and to Arizona’s backcountry. I spent many weekends with dozens of other volunteers transforming the airstrip into what it is today. Though Grapevine is really “backcountry light,” it offers a great introduction to a different kind of flying and should not be missed. I hope to see you out there!